For the write up on why I chose Rol Wheels over the many other custom and commercial options for wheels, see my original post My experience as a newbie cyclist buying his first set of non stock wheels.. 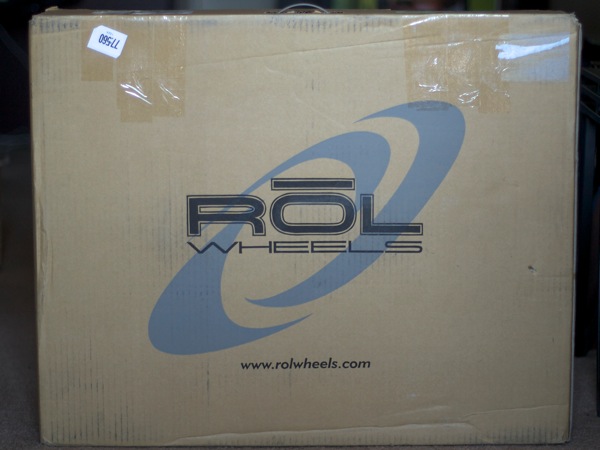 Though packed in nothing but cardboard, the wheels were well protected and secure. It couldn't have withstood a pallet of cinder blocks being dropped on them or anything, but appeared perfectly suitable for normal shipping bumps and bangs. 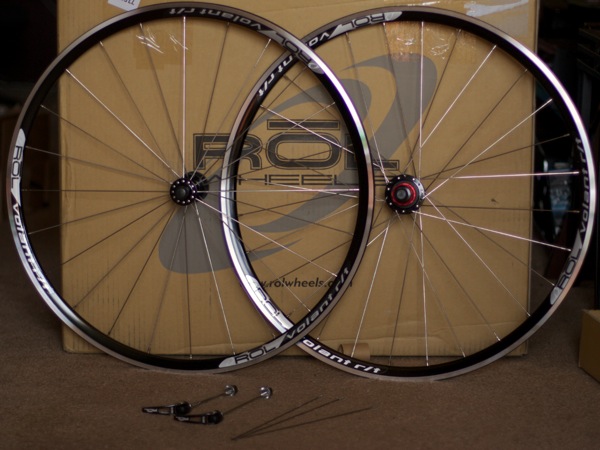 The wheels themselves looked absolutely sexy. Polished with nice looking decals. A quick ping test on spoke tension gave an equal tone for all spokes. I didn't put them up on a truing rack right off the bat, but a visual check on the mounted wheels didn't indicate any warping. In hindsight, I should have driven them up to the shop if only for a reference on the 300 mile followup. As others have mentioned on many of the Rol Wheels reviews on roadbikereview.com, the only negative as far as construction might be the plastic pokers for the hubs. But, in my book, this is a minor detail.

Well, of course the real test of a new wheel set is when they're doing what their meant to do...rolling! And I couldn't have had a better impression of the Volants at that task. They spin up well and corner great. Now, as I mentioned in my original post I'm a newbie so I'm likely not pushing the absolute limits of my bike. However, I did seem to notice a difference between the Volants and my stock Mavic Open Sport's with shimano 105 hubs. They seemed to hold the line a bit better without flex on tight turns. It could all be in my head or maybe I was just really trying to push the new wheels and just got more out of them because of that. Bottom line is, no dissappointment on that front.

The only possible negative to the wheels is the hubs are of the noisy variety when freewheeling. It doesn't bother me, but if such things do bother you it's something to take into consideration. Personally, in some ways I even like it. The only time I freewheel is when I'm slowing for other riders or pedestrians on bike paths and the audible click usually lets them know I've rolled up behind them. However, the noise is low enough to be drowned out by the wind for the most part.

To make one thing clear off the bat, after 300+ miles of riding I don't expect a new set of wheels to remain true. . . even if they've been pre-stressed. You should always do a followup check on your new wheels to make sure they held tru after teh first few weeks of riding. As such, none of the adjustments I note below in the followup should be taken as a slight against the quality of Rol Wheels.

After approximately 300 to 400 miles of road time, I brought the wheels into my local bike coop Bikerowave, free to all Santa Monica College students! While there I threw the wheels up on a truing stand.

The rear wheel had become dished toward the side with the shorter spoke angle. One thing I found odd is that it was perfectly dished, by which I mean they were evenly dished arround the entire wheel. This is something that the naked eye likely wouldn't catch on a quick spin check unless you were paying close attention to the spacing between the wheel and the rear fork near the bottom bracket. This is why I wished I'd taken the time to bring them to the shop out of the box to see if they came from the factory like that. If they had, it may be an indication that one of Sean's truing stands is dished. However, it's not a big deal to correct which is exactly what I did with a few 1/4 turns around the circumference of the wheel.

The front wheel was still very, very close to tru. I tightened it up a bit bringing it to within 1mm which is good enough for government work.

So, the final verdict is I'm very happy with the new wheel set. If given the choice to do over I'd make the same decision. The weight to price to performance ratio is stellar and when I called with questions Sean, the owner, was very responsive (picked up on the first ring).